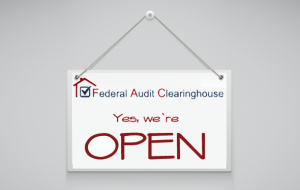 The last weekend in November brought more than just turkey and the start of the holiday shopping season, the Federal Audit Clearinghouse (FAC) reopened and is again accepting single audit submissions.

If your entity received more than $500,000 in federal grants during the fiscal year, you are required to have a single audit performed and submit that information to the FAC.  This information is submitted through the FAC’s Internet Data Entry System (IDES).  Both the IDES and the full FAC website have been inaccessible since July 2015, when a security incident occurred.  Since that time, deadlines have been extended several times.

Since the site has reopened, an additional single audit submission deadline extension has been put in place.  According to the FAC’s website, audit submissions due between July 22, 2015 and January 31, 2016 will be granted an extension through February 1, 2016.  The ‘Submit an Audit’ link is now available, but the ‘Find Audit Information’ link is still down.

Because of the security incident, the FAC has been working to make security improvements and to perform system testing.  One of the changes will require users to update their passwords when they enter the FAC website for the first time.  The process to update your password has not changed.

Now that the FAC system is up and running, the U.S. Office of Management and Budget is suggesting that, although an additional extension has been granted, earlier submissions are encouraged whenever possible.  For our BHP clients, we will begin the process of submitting your entity’s single audit information to the FAC.  As in the past, you will receive automated emails to walk you through the submission process.  If you are not a BHP client, we suggest that you contact your independent auditors to ensure that your single audit submission is handled promptly.

← Hackers cause delay in year-end processing of Single Audit reporting Do You Know an Interested Party? →
UA-56404749-1