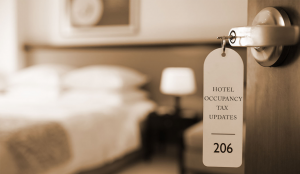 During the 85th Legislature, Senate Bill 1221 was passed that established mandatory reporting requirements for municipalities that impose (levy) certain Hotel Occupancy Taxes (HOT). Chapter 351, Subchapter A of the Tax Code was amended to include Section 351.009. The required reporting period covers the most recently completed fiscal year. All reports are due to the State Comptroller no later than February 20 each year. This requirement is for all municipalities that impose the tax, even if no revenues were collected during the most recently completed fiscal year.

The reporting requirements include:

The information noted above must be reported using one of the two options noted in the bill.

Option 2: Provide the Comptroller with a direct link, or a clear statement, describing the location of the information required to be reported on the municipality’s website. The Comptroller has developed an optional template that may be used by municipalities electing Option 2. Below is a link to this template:

The Comptroller’s office intends to make available all municipal data and direct websites provided to it during the reporting period through a downloadable dataset.

For more information on Senate Bill 1221 or additional information provided by the Comptroller’s office, please visit the links below:

← Audit or Review with SACS Accreditation?