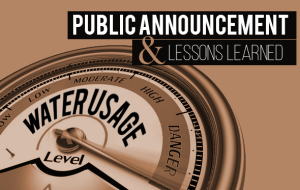 Water Meter Errors of 2015 may go down in City management’s history books as the “Perfect Storm” where social media, water usage, and conservation rate structures collide.  The integrity of City management and City utility billing systems is being challenged in many cities across Texas.  The speed in which this new type of storm hit has taken many management teams off guard.  While most cities have emergency response plans for disasters caused by mother nature or manmade events threatening lives, health, safety, and property of citizens, an attack on the integrity of the government itself was likely not on the watch list.  Everyone in City government and, for that matter, all governments and business leaders should take notice.  We all need to adjust our way of thinking to the “NEW” state of normal, creating new forecasting tools and response plans. We can help with this current event and be a part of the City’s plans for the future.

So what happened?  We had freakishly persistent and heavy rains at the end of May resulting in soggy yards in June, followed by the same drought-like conditions for August and September that have been common for the past several years.  This caused abnormally low water usage followed by high usage.   Extremely happy utility customers were turned red-faced mad in September when they opened their water bills and had sticker shock from the change.

The second thing that happened is a short-term mindset being contrary to a long-term public policy which is imbedded into the water rates.  There is, and will continue to be, an increasing water shortage across the state which is reflected in most water providers having tiered water rates to encourage conservation efforts.  After standing in ankle or knee deep water in May, it was easy to feel like the Drought War had been won, however, the relief was temporary and didn’t warrant a shift in long-term public policy for the need to conserve water.

The last component of the “Perfect Storm” was the connected nature of citizens through social media and traditional media sources.  Five to ten years ago, the two events above combined together would have resulted in a small outcry of some citizens.  There has always been a small group of conspiracy theorists in most communities.  However, now the “shock and awe” of the September water bills could be instantly communicated and each person’s outrage could be coupled by another’s, whipping the crowd up into a frenzy.  Right or wrong, this is the “NEW” state of normal.  It doesn’t have to be a police shooting or beating for anti-establishment sentiments to go viral quickly.

While we can be thankful this “Perfect Storm” resulted in no loss of life, personal injury, or damaged property, it did cause many citizens to lose confidence in their City government and leadership.  Moreover, the reputations of hardworking individuals who are as honest as the day is long were needlessly challenged, as if they had some personal motive for misreading all the City’s water meters. Members of management at many Cities are still consumed with addressing this topic and trying to move the issue and re-instill confidence in their administration and the utility billing system itself.

I have found that when allegations within a community rise to a level where it consumes the majority of the management’s resources or causes the reasonable people within the community to begin to question the integrity of the government, it is time to call your auditor.   Your auditors can do more than just audit your financial statements.  They are very familiar with your operating systems as well, and can perform what is called an “Agreed-Upon Procedures Engagement” under standards established by the American Institute of Certified Public Accountants (AICPA).  These procedures can then be selected to address the specific concerns or allegations.  The trick is always to narrow the scope as much as possible to get the best bang for the buck. Get your CPA hired, have boots on the ground, and get a report in hand QUICKLY.   Even more importantly is to get your response in and out as fast as possible and in the same circles being used by the citizens with the pitchforks in hand.  One way to do this is by issuing a public announcement (see Table 1):